Why I Played at Play NYC

How Did Your Weekend Go?

This past weekend I was showing off Chromavaders at Play NYC, New York's largest annual gaming convention.  I've never shown anything off at a convention before; standing on my feet shouting about my game for twenty hours was exhausting!

Thankfully, Chromavaders was a hit!  I had 100 stickers printed and gave out all of them, and I'm almost out of cards. 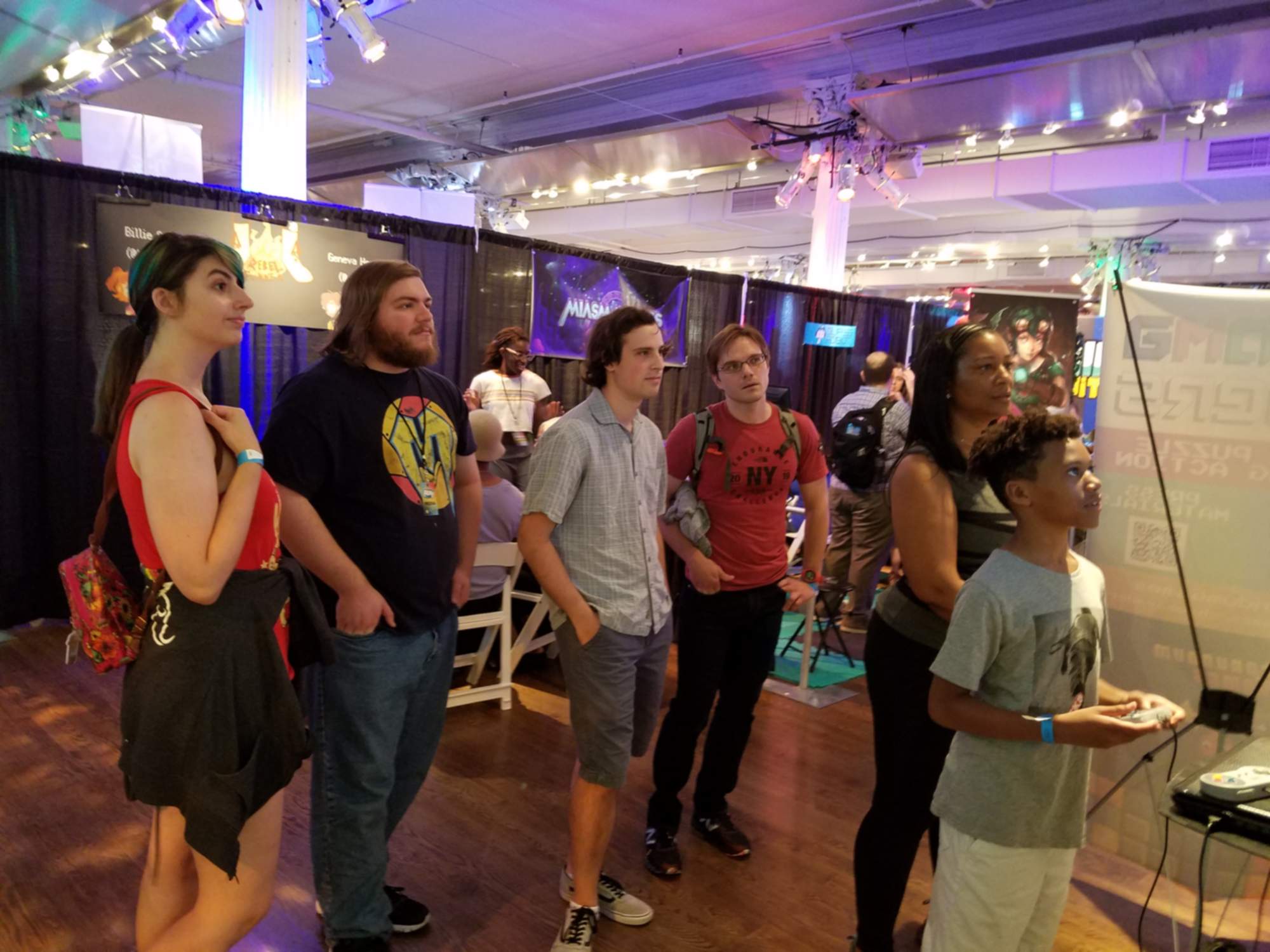 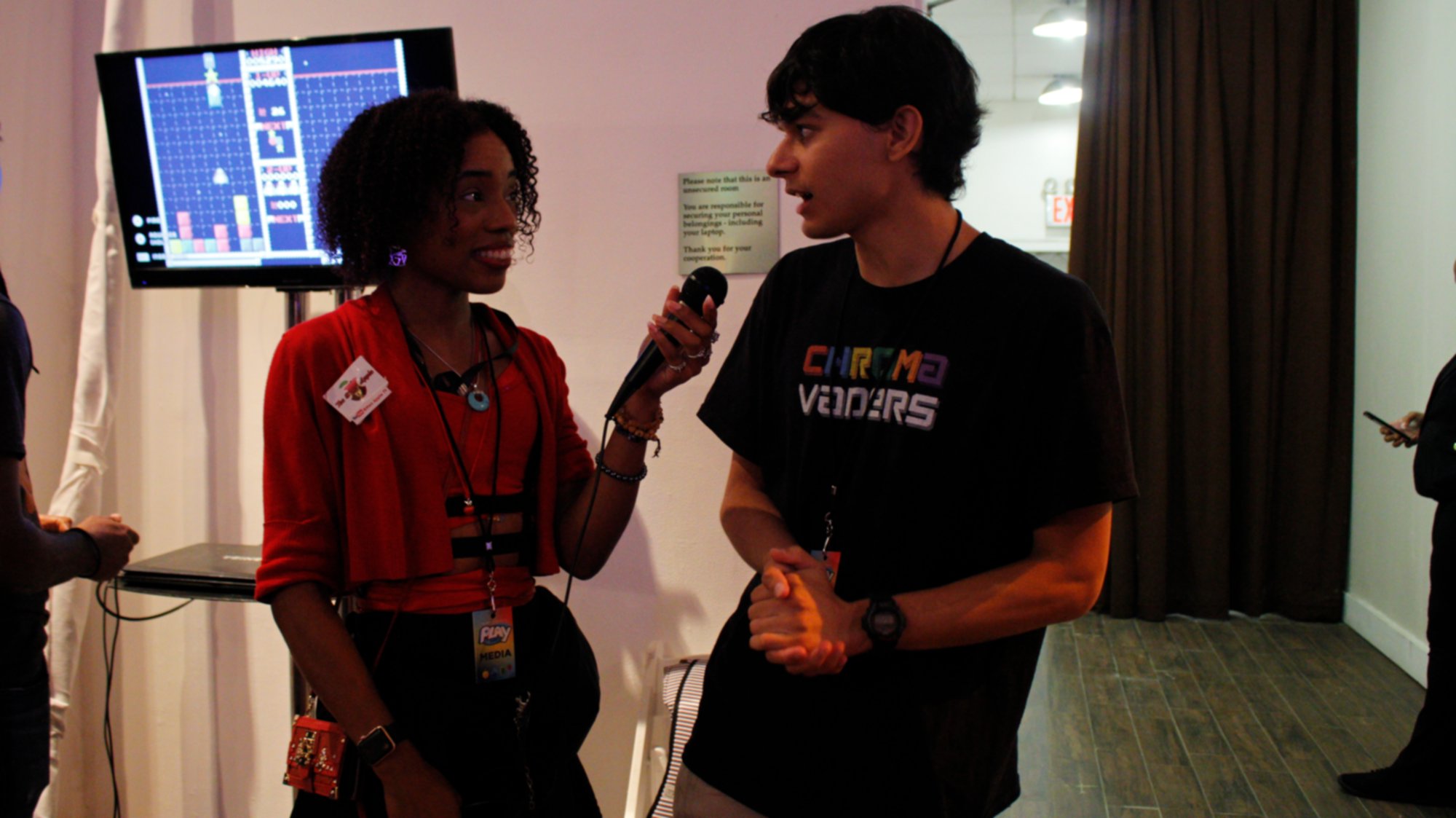 I met quite a few media people, too; some independent, some part of an outlet.  Each and every one of them was great!

But can I call the event a success?  I don't know yet.  My goal is to get this released on the Nintendo Switch.  To do that, I have to convince Nintendo or a third-party publisher that enough people would buy it.  By that metric, Play NYC has not yet helped me achieve that goal.  I soon learned that it's not that simple; here's where I stand so far.

The first thing I considered was self-publishing.  I pitched Chromavaders to Nintendo, but was turned down without any further explanation.  Bummer.  Later on I heard through the grapevine that Nintendo generally doesn't license developers without a track record of successful releases, unless they're working with an established publisher.

Coincidentally, I had recently met with a family member's connection for coffee about career advice; the gist of that meeting was to network, network, and network, and that getting your first job is hard because of your lack of experience, but the rest are much easier.  Why wouldn't this apply to getting a game published?

Up to this point, I had mostly been playtesting in chat rooms.  This is helpful for getting feedback, but not for building lasting connections, so I hit the pavement to find them.  Later that month I met Sam Levine at Unity NYC, and he suggested I start attending NYU's Playtest Thursdays.  This turned out to be an excellent idea.

I'm happy to write about my experience playtesting at NYU; it has been an amazing one.  But that's worthy of another post, so put a pin in that for now.

Skip ahead to about two weeks before Play NYC.  Playcrafting was hosting a demo night for a few games debuting at Play NYC.  There, I met Dan Butchko (the CEO) and Evangeline Ignacio (the event coordinator).  After seeing some of the games people had made, I got curious.  The three of us discussed of me exhibiting Chromavaders at Play NYC.  After a few e-mails (one of which included a link to a build), Evangeline followed up with an exhibitor form; normally I'd have had to formally apply, but I guess this whole exchange counted.

I wasn't yet sure if I wanted to show off at Play NYC, but I had to make a decision soon.  Was I ready?  Could I afford it?  What materials did I need, and could I create them in time?  At the next night's Playtest Thursday, I sought advice.  One person who was there suggested that my game was polished enough that I could start building hype around it.  I was personally a little hesitant -- there were still some core mechanics I'm working on, and in fact there still are -- but Play NYC wasn't going to wait for me.

Which brings us to August 10th and 11th.  I was on the floor from 9 AM to 6 PM each day, plus a little extra for the afterparty on the 10th and a bit of mingling when I set up on the 9th.  That's about 20 hours, total.  Most of that time, I was hoping that someone would come by, hand me a card, say to me "let's do lunch", and then it would be downhill from there.

That was wishful thinking on my part.  Many people played my game, and that's awesome.  Everyone who did loved it, and that's also awesome.  Hell, that's my real goal, to make games that people enjoy!  But I can't do that for a living without making money off of them.  In retrospect, it was probably a bit amateurish to expect that some gatekeeper to success would mysteriously bless me with the answer to my problems.

I did have a great time on the floor, though, and met a lot of people.  I intend to continue exhibiting games I make at Play NYC or similar events.  Count on that.

Another exhibitor at Play NYC suggested to me that a much more practical goal would be to build a social media following while seeking out publishers.  In other words, give them evidence, not promises.  So now I am.

But I can't do that alone.  This is where you come in; all you have to do is play the game!  If you don't like it, tell me why and help me make it better.  If you do, tell other people to play it!  I don't even need money right now, I just need hard evidence that I'm making a good game that people would buy.  The more likes, retweets, downloads, plays, etc. that I can point to, the more likely that I can get a Nintendo Switch dev kit license.  Help me out, make some noise!

I want to thank my brother Noah for his help in managing the kiosk and producing marketing materials, and for our parents for their support (and Mom specifically for the attached video)!  I couldn't have done any of this if you guys didn't have my back.  Love you all.